The growth of an ambitious project

When we opened La Sorbetteria Castiglione in Bologna in 1994, we were at our first experience as entrepreneurs. There were few ice cream parlours in Bologna, the average quality of ice cream in Bologna was rather low and customers were poorly informed about production techniques and raw materials.
We started with our boundless enthusiasm and the fortune of having worked for almost 10 years with the Negrini family, masters of life and work, owners of the legendary Pino ice cream parlour.
Today there are more than 100 ice-cream parlours in the city and province, which makes Bologna a capital of ice cream, now on average the ice cream is everywhere much better than then.
Today, as then, Sorbetteria Castiglione is one of the few ice cream parlours in Bologna to guarantee the continuous production of ice cream in the open laboratory.
Our open laboratory is equipped with state-of-the-art equipment and systems that allow us to continue our research towards quality and health without stopping.

Over the years we have tried to create a welcoming environment trying to combine the opportunity to tell all the little secrets and anecdotes of our trade and the legitimate curiosity of the customer to see and know what is proposed and served. This led to the idea of creating an open laboratory that would show the commitment with which we devote ourselves every day to the creation of ice-cream and pastry products of the highest level.
The Sorbetteria Castiglione is an ice cream parlour in Bologna where you can enjoy 5 minutes of fun from breakfast to midnight ice cream, designed to be a refuge from the routine and stress of everyday life.
The history of Sorbetteria is a fantastic heritage of relationships with the customer who asks, advises, proposes. And that’s how every day loyal customers become part of a large family that helps us to grow.

“Listen and learn every day, do better than the day before…” 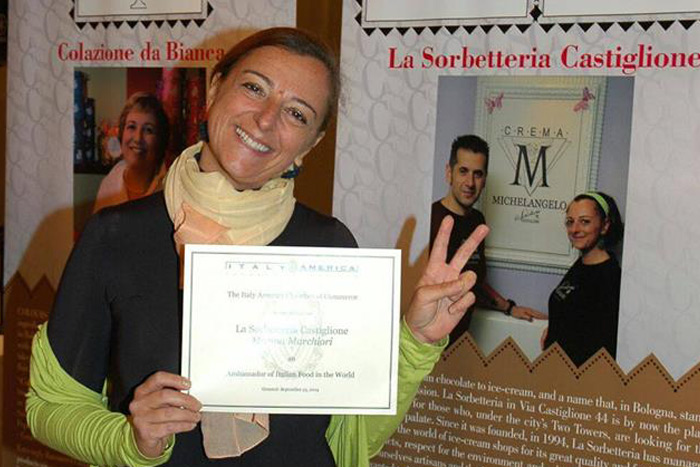 Marina Marchiori
If you meet her you will immediately recognize her by her smile and friendly and generous approach … is Marina Marchiori.
Her unmistakable laughter resonates in the great open kitchen of Sorbetteria Castiglione, where, for more than twenty years, she has been developing recipes and calibrating ingredients that make her ice creams, pastries and chocolates, unique.
She is the mother of three boys, an entrepreneur and thanks to her commitment to research she has been appointed by the New York Chamber of Commerce as Ambassador of Italian Food in the World; yet when she speaks of her work she does so with incredible modesty.

“Our ice cream is made for any kind of request, we are like tailors who draw a dress on anyone who asks us.”
Passion, measure, tenacity, but also curiosity and openness to every new stimulus are the ingredients that don’t appear in the recipe books, but that make a difference in the taste of living.
A curiosity? In his early twenties a she asked for a mortgage to start her business, but the director of the bank did not accept to support the enthusiasm and determination of that girl. However, time and effort have shown that it’s worth it. 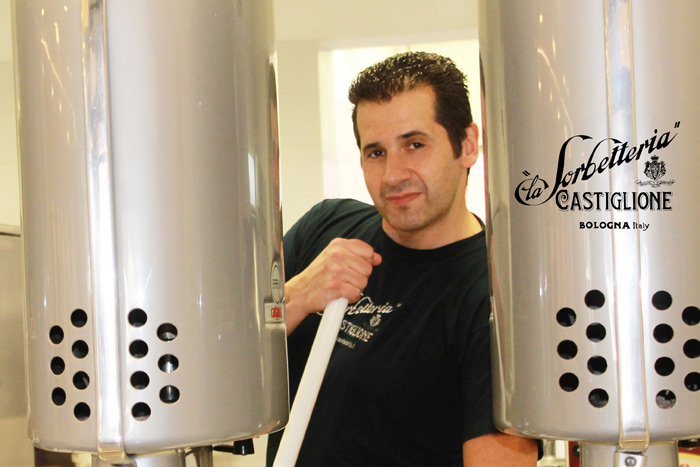 Giacomo Schiavon chef
You have certainly seen him peeping out in the laboratory in via Castiglione, engaged in creating recipes to calibrate the ingredients, is Giacomo Schiavon.
He studied for a long time the balance of sugars and other ingredients so that the ice cream you enjoy had a perfect consistency even when stored in your home freezer. It’s a shame that our customers, then tell us that it doesn’t last long because they eat it all right away!
He likes to joke and was chosen by the Italian excellence Cattabriga as a Master Gelato maker to teach the art of making ice cream all over the world. His commitment and passion for this work have made him a careful taster and a generous master. 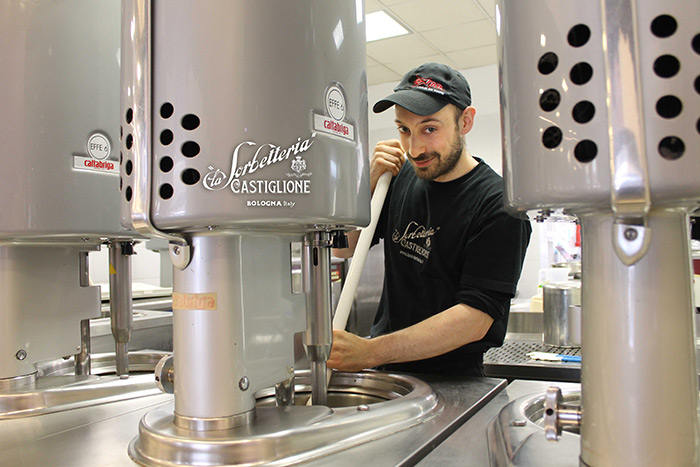 Riccardo Vecchi chef
Serious, precise and creative is the “nerd” of Sorbetteria Castiglione. He has 29 years and has been working with us since 2008, when he just graduated from the hotel sector and took up a hard but satisfying job. He also grew up professionally in the Sorbetteria Castiglione workshop, helping to generate the relaxed atmosphere that you can breathe in Sorbetteria with his sympathy.
He makes fun of it, he knows how to conquer with the sweetness … of ice cream!

We use cookies on our website to offer you the most relevant experience by remembering your preferences and repeat visits. By clicking on "Accept" you agree to the use of ALL cookies. However, you can visit the Cookie Settings to provide controlled consent. Read more
Cookie settingsACCEPT ALLREJECT
Manage consent

Necessary Always Enabled
Necessary cookies are absolutely essential for the website to function properly. These cookies guarantee the basic functionality and security features of the website, anonymously.
Functional
Functional cookies help perform certain functions such as sharing website content on social media platforms, collecting feedback and other third party functionality.
Performance
Performance cookies are used to understand and analyze key website performance indices which help provide a better user experience for visitors.
Analytics
Analytical cookies are used to understand how visitors interact with the website. These cookies help provide information on visitor numbers, bounce rate, traffic source, etc.
Advertisement
Advertising cookies are used to deliver relevant ads and marketing campaigns to visitors. These cookies track visitors to websites and collect information to deliver personalized ads.
Others
Other unclassified cookies are those that are analyzed and have not yet been classified into a category.
Salva & Accetta